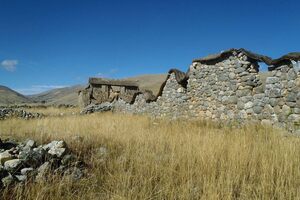 Walking through Huánuco Pampa, an old Inca settlement in the mountains of Peru, is like stepping back in time. Though it was abandoned long ago, the city is remarkably well preserved.
Huánuco Pampa (aka Huánuco Viejo and Huánuco Marka) was built along the main Inca highway that stretched nearly 25,000 miles from Quito to Cusco. It was an administrative center built on a plateau conveniently defended by the steep slopes demarcating its perimeter.
In addition to its administrative functions, Huánuco Pampa was also an important place to store foodstuffs. Its nearly 500 storehouses and numerous food processing centers showcase the massive planning and organizational skills the Incas needed to sustain a their sprawling empire.
Apart from the strategic, mountainous location, this site was probably quite unremarkable. Its lack of grandeur may have been its saving grace. The conquistadores by-and-large neglected Huánuco Pampa, which helped it to survive and become the prime archaeological site it is today.
Dating Huánuco Pampa is no straightforward feat. It’s believed it was constructed after 1460 and then abandoned around 1539, when the conquistadores arrived in the region. Its construction was motivated less by the need to control natural resources than by bureaucratic motives.
Today, on a stroll through Huánuco Pampa you’ll come across the remains of the baths and main palace. You’ll also see the enormous plaza where the Incas built a pyramid, which, from the top, is where dignitaries would oversee festivals and celebrations. Despite centuries of neglect and harsh weather, the finely cut and accurately set stones still showcase the refined and rare craftsmanship of the Inca.