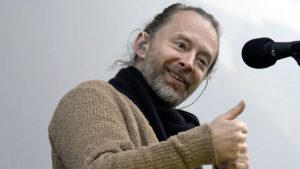 Photo via @GlasgowBDS / Twitter Next week, Radiohead are due to take the stage in Tel Aviv, Israel. The performance has drawn controversy from Palestinian activists, who’ve called for a cultural boycott of Israel until Palestinians are granted greater equality under Israeli law.