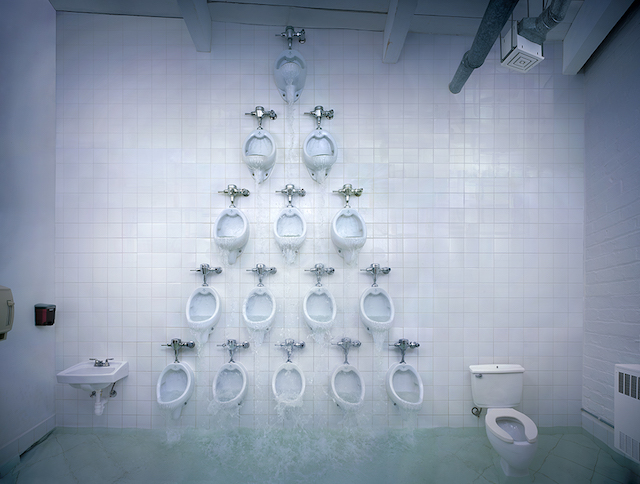 When a pyramid of American Standard urinals appeared as an immersive installation back in 2004, the work’s creator, Reece Terris, wasn’t just riffing on Marcel Duchamp’s readymade, but also exploring how objects transform spaces. The work, appropriately titled American Standard, was a fully-functional public indoor fountain, Terris explains on his website, that made the most private space incredibly public. With water cascading down the pyramid of urinals, American Standard is like much of Terris’ work: an exploration of how humans are constantly altering reality with structures, objects, information, and pure spectacle.

Looking at his website, it would appear that Terris stopped working around 2012. Terris, however, tells The Creators Project that this was no disappearing act—he simply stopped updating his website. The Vancouver-based artist, in fact, has been quite active in recent years with installation and photographic works. Terris’ recent installations aren’t complete simulations like Trivial Pursuit (2002), an old trailer cut in half to expose the interior design, or Ought Apartment (2009), a tower with six apartments stacked atop each other, but he’s indeed still interested in architecture and built environments.

Instead, his current work is more of a nod to one of his first installations, Bridge (2006), a temporary sculptural intervention that linked two residential homes with an actual wooden bridge. This and other works build off of the political edge he established with large-scale installations like Good Bye Work (2012) and The Western Front Front: Another False Front (2010), pieces that comment on gentrification and globalization in different ways. In the former, Terris altered Globe Dye Works’ signage to read “Good Bye Work,” and in the latter, he built a Wild West-style boomtown facade onto an existing building at a larger scale in order to make a statement on development.

In 2013, Terris unveiled Display-Displace, a site-specific installation created for Nuit Blanche Toronto, a night when the city is transformed by artists into a creative playground. In this work, Terris gathered furniture typically found in lobbies and office buildings, then reconfigured them into abstract sculptural works. For Terris, the lobbies and interior designs of financial institutions have a consistent aesthetic, one that flaunts global capital and finance but also tries to humanize it. He sought to take this type of furniture and make it into modular art for the public instead of the private sphere. 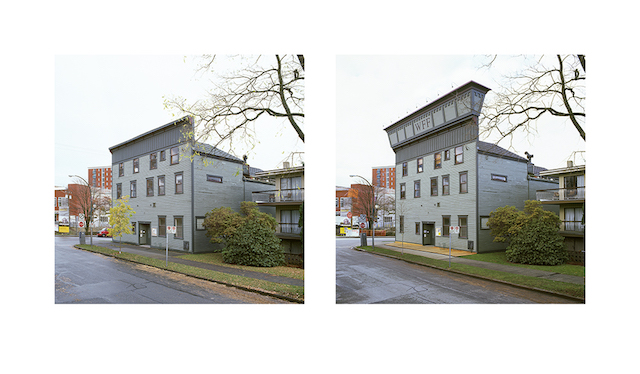 Before and after photos of the fake Western boomtown-style facade that Reece Terris built on top of an existing building for The Western Front Front: Another False Front

“I also did a public art piece called Triumph of the Technocrat for a developer here in Vancouver,” Terris says. “There is a really interesting phenomenon where a percentage of a developer’s product, based on the square footage, has to go into public art.”

“It’s the most fucked idea of what culture is supposed to be—that you have to be able to say that this much has to go into arts and culture,” he adds. “But it shouldn’t be going to one person—it should be going into art schools or kids or whomever, for anyone who has an interest in art and who might have a place of value in the culture.” 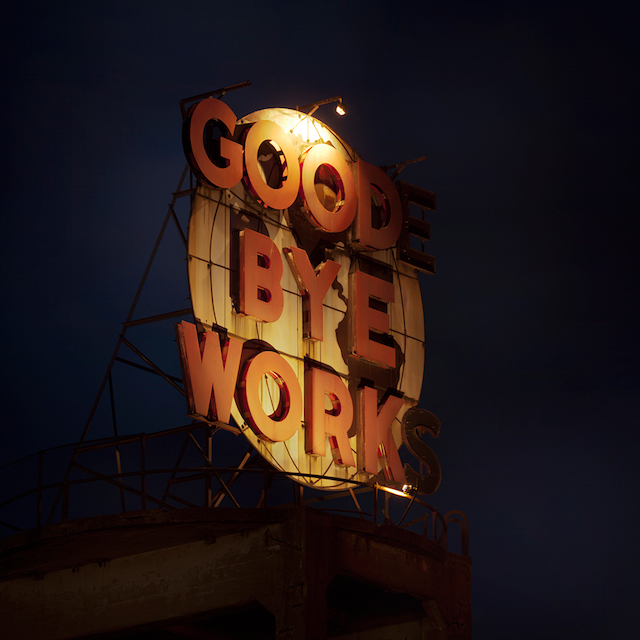 Located outside The Lauren, a high-rise in Vancouver billed as the cutting edge in design, Terris’ sculpture is made of reclaimed wooden girders that he salvaged from St. John’s Church, the site’s prior occupants. Seated atop a circular reflective pool, the sculpture features two circular and mirrored discs, creating a sort of labyrinth of reflections.

The structure itself is taken from a sculpture that the high-rise architect had used as a placeholder in design plans. Terris, who asked to use the forms for his work, then turned these pieces into a comment on Vancouver, global development, and land speculation that tries to fuse private and public interests. The developers may have got what they wanted from Terris, a permanent artwork, but at a price: Terris’ conceptual middle finger sticking up at them. Terris played their game—one into which he inserted his own rules. 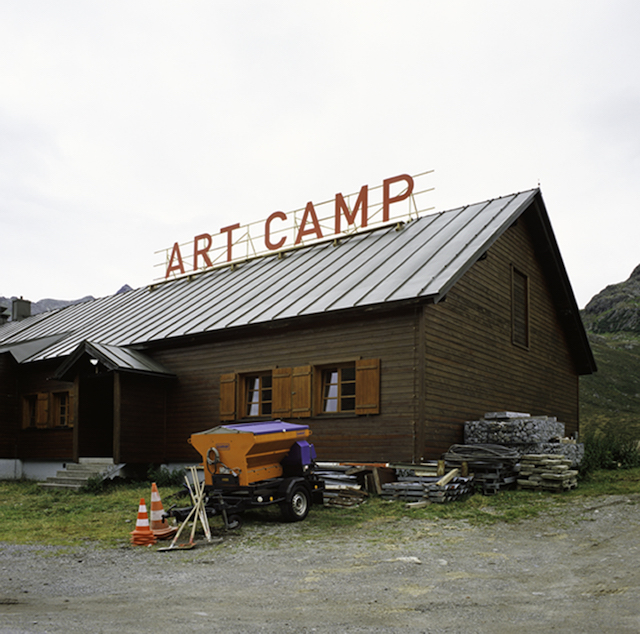 “In my opinion, the culture has become so bereft that we have to mandate culture,” he adds. “What is that? Is it that fascism or something else? I don’t know. So, there is a text associated with Triumph of the Technocrat that talks about this whole mandate about what public art is.”

From August 2014 to early 2015, while an artist-in-residence at an active work camp in Liechtenstein in the Austrian Central Alps, Terris worked on a series called Art Camp. For it, Terris fabricated large-scale signage, which he then mounted onto two rooftops of the existing laborers’ barracks. One of these buildings doubled as temporary housing for artists during their stay as part of Austria’s Silvrett Atelier Biennial. The sign over the artists’ barracks read “Art Camp,” while the signage over the workers’ barracks read “Work Camp.” 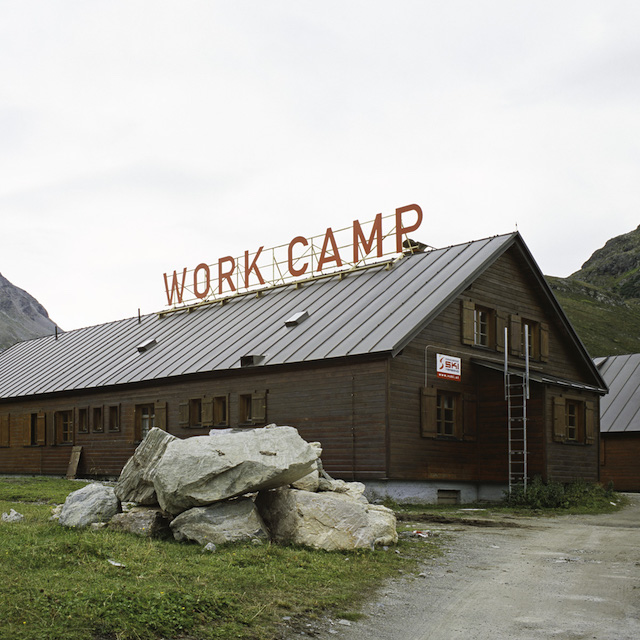 “These camps are situated near the base of a massive concrete dam, where remedial work and restoration are currently underway,” says Terris, who also took photographs of his signage as another aspect of the work. “The buildings and their geographic location are of historical and political significance in that this was once the active site of a forced-labor camp. During WWII, prisoners here were compelled by the Nazis to construct the original dam.”

“Like my other work, it was still architecturally additive and adaptive,” he adds. “I think it was a direct correlation to Good Bye Work by integrating text into architecture, which was my first use of and messing with words. It’s not poetic—they’re pretty straightforward comments. But, it’s interesting to see the trajectory of where you get your energy from and how it comes out in the work and keeps morphing and morphing.” 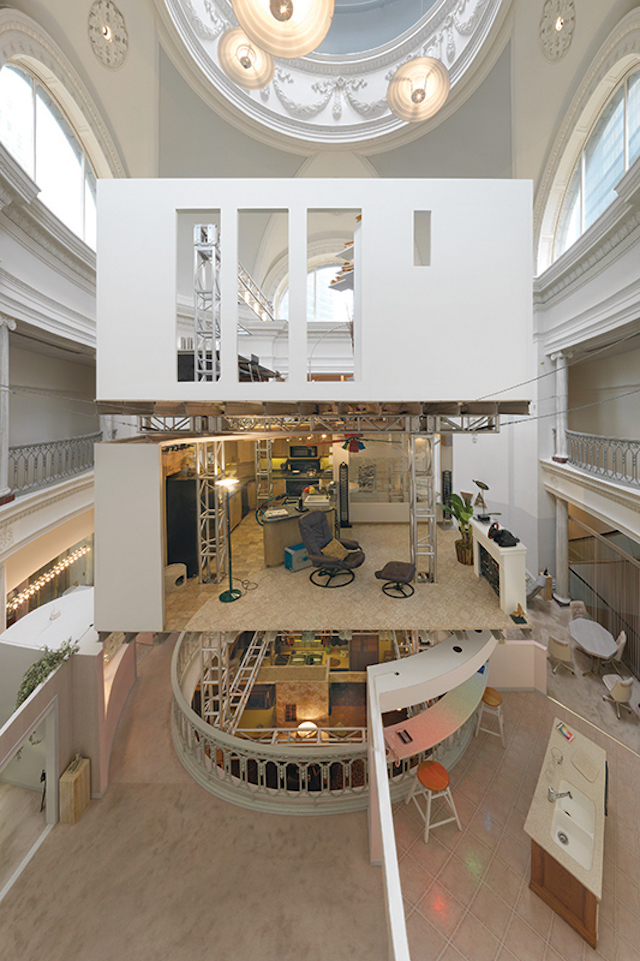 Contextual view of Ought Apartment (2009)

With politics being what they are, especially with the spectacle of the Trump presidency, Terris believes that art, perhaps more than ever, is the last refuge of pure creativity. That it is, ultimately, the final act of defiance and rebellion.

“Maybe art gives people the opportunity to unzip the bag or whatever, and just start thinking about the structures we’ve been given,” says Terris. “I think that was the most exciting thing about art for me because it just made me aware. It made me aware of situations that I could comment on.”

These Vanishing Resin Chairs Are Representative of Existential Crisis

[Premiere] How a ‘Scream’ of Post-War Japanese Art Pioneered Modernism