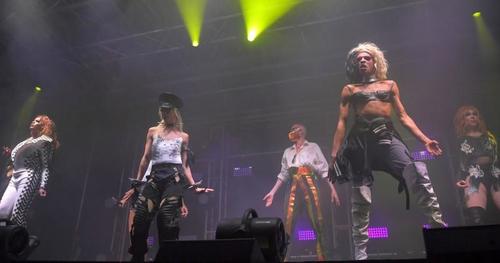 A U.S. Air Force base responded to controversy about a drag queen show hosted by the base by saying the performance was “essential to the morale, cohesion, and readiness of the military.”

Nellis AFB staged its first ever drag queen show on June 17th called ‘Drag-u-Nellis’ – which it said was important in teaching military personnel the “significance of Drag in the LGBT+ Community.”

After some veterans raised concerns about why such an event was being hosted, Nellis hit back with a statement defending the show.

So @NellisAFB is having a base-sanctioned drag Queen show; isn’t that awesome?

Maybe some of our military “journalists” can call them up and ask them about this. 🙄 pic.twitter.com/CJdGjpuun9

“The event was sponsored by a private organization and provided an opportunity for attendees to learn more about the history and significance of drag performance art within the LGBT+ community,” said the statement, adding that

“Ensuring our ranks reflect and are inclusive of the American people is essential to the morale, cohesion, and readiness of the military. Nellis Air Force Base is committed to providing and championing an environment that is characterized by equal opportunity, diversity and inclusion.”

The whole effort is part of a Pentagon recruitment drive to appeal to LGBT people, with Defense Secretary Lloyd Austin dismissing criticism of the program as “talking points” that foreign adversaries could “capitalize on.”

He went on to claim that the U.S. military was not going “soft” and is instead focused on doing a “great job of recruiting the right kinds of people.”

Although the Trump administration went someway to reversing the woke takeover of the military, it’s back to full steam ahead under Biden.

The rot started under the Obama administration, during which in some instances cadets were made to take part in an event called Walk a Mile in Her Shoes, which sought to raise awareness for sexual assault victims by having men wearing Army Combat Uniforms parade around in red high heels.

Meanwhile, China and Russia are laughing hysterically as they concentrate on training their soldiers to engage in actual combat rather than pandering to the LGBT community.

Brand new merch now available! Get it at https://www.pjwshop.com/

In the age of mass Silicon Valley censorship It is crucial that we stay in touch. I need you to sign up for my free newsletter here. Support my sponsor – Turbo Force – a supercharged boost of clean energy without the comedown. Also, I urgently need your financial support here.