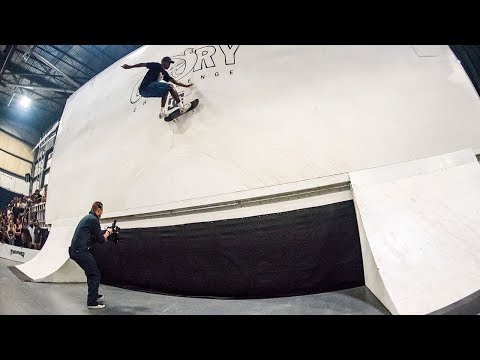 Back for its fourth year, the highly-entertaining skate competition by Dime took place on Sept. 15 in Montreal, Canada. The series of games included the notable Volcano Challenge, Gladiator Challenge and Speed Challenge, along with the Pyramid Challenge and Wall Challenge to test for a variety of skills. 50 contestants from around the world were selected via an algorithm to take place in the annual competition to compete for a sum of $1 million USD in cash prizes. Palace skater Jamal Smith entered on a "unicorn" to kick off the festivities, as a chorus of monks led the audience in a sing-along. Three-time champion Wade Desarmo proved victorious over Ishod Wair, leaving him undefeated for his fourth win, while Louie Lopez and Kader Sylla were crowned as the MVP’s for the evening.
Take a look at Thrasher’s recap of everything that went down at the amusing competition above.Read more at HYPEBEAST