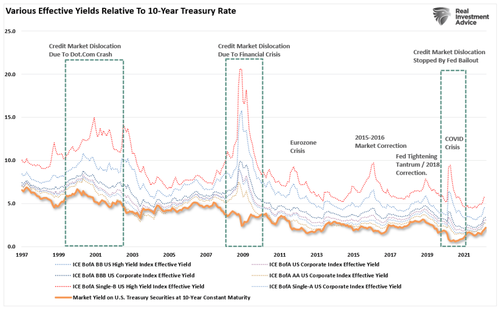 Yield curve inversion conversations are dominating the media to the point it almost sounds like the start of a bad joke.

“A yield curve inversion walks into a bar. The bartender asks ‘hey, what’s got you down?’”

The conversations are primarily dismissive under the “this time is different” scenario. As noted by Yahoo Finance last week:

“Take a look at the August 2019 inversion. A recession did happen a year and a half later. But it was triggered by a global pandemic — something bond markets could not have possibly foreseen or predicted.”

That isn’t accurate as the recession occurred only 6-months later. Furthermore, the bond market did know there was something very wrong economically as the Fed was engaged in a massive repurchase operation to bail out hedge funds.

As we noted then, all that was required to push the economy into a recession was an “unexpected, exogenous event.” That event turned out to be a pandemic.

Notably, when psychology changes, for whatever reason, the rotation from “risk-on” to “risk-off” will find Treasury bonds as a “store of safety.” Historically, such is always the case during crisis events in markets.

Once again, it is pretty likely investors should not overlook the message from the bond market. Bonds are essential for their predictive qualities, so analysts pay enormous attention to U.S. government bonds, specifically to the difference in their interest rates.

This data has a high historical correlation to where the economy, stock, and bond markets generally head longer term. Such is because everything from volatile oil prices, trade tensions, political uncertainty, the dollar’s strength, credit risk, earnings strength, etc., reflects in the bond market and, ultimately, the yield curve.

Yield Curve Inversions
When it comes to yield curve inversions, the media always assumes this time is different because a recession didn’t occur immediately upon the inversion. There are two problems with this way of thinking.

The National Bureau Of Economic Research (NBER) is the official recession dating arbiter. They wait for data revisions by the Bureau of Economic Analysis (BEA) before announcing a recession’s official start. Therefore, the NBER is always 6-12 months late dating the recession.

It is not the inversion of the yield curve that denotes the recession. The inversion is the “warning sign,” whereas the un-inversion marks the start of the recession, which the NBER will recognize later.

As discussed in “BTFD Or STFR,” if you wait on the official announcement by the NBER to confirm a recession, it will be too late. To wit:

“Each of those dots is the peak of the market PRIOR to the onset of a recession. In 9 of 10 instances, the S&P 500 peaked and turned lower prior to the recognition of a recession.“

When numerous yield spreads turn negative, the media will discount the risk of a recession and suggest the yield curve is wrong this time. However, the bond market is already discounting weaker economic growth, earnings risk, elevated valuations, and a reversal of monetary support.

Historically, a recession followed when 50% or more of the tracked yield curves inverted. Every time. (Read this for a complete history.)

Ignore At Your Own Risk
In the World War II real-time strategy (RTS) game Company of Heroes, the engineer squad would sometimes say:

“Join the army they said. It’ll be fun they said.”

Since then, the statement has become a common meme on the internet to espouse the disappointment from various actions, from doing the laundry to getting a job.

Well, the latest suggested action, which will ultimately lead to investor disappointment, is:

“Ignore the yield curve they said. It’ll be fun they said.”

“Historically, equity markets tended to produce some of the strongest returns in the months and quarters following an inversion. Only after [around] 30 months does the S&P 500  return drop below average,”

12-months later, the market was down 35%, and the economy was in the deepest recession since the “Great Depression.”

The yield curve is sending a message that investors should not ignore. Furthermore, it is a good bet that “risk-based” investors will likely act sooner than later. Of course, the contraction in liquidity causes the decline, which will eventually exacerbate the economic contraction.

Despite commentary to the contrary, the yield curve is a “leading indicator” of what is happening in the economy currently, as opposed to economic data, which is “lagging” and subject to massive revisions.

More importantly, while the consumer may be continuing to support growth currently, such can, and will, change dramatically when job losses begin to occur. Consumers are fickle beasts, and it will happen very rapidly when a change in psychology occurs.

While using the “yield curve” as a “market timing” tool is unwise, it is just as foolish to dismiss the message it is currently sending entirely.

History has not been kind to those that do.